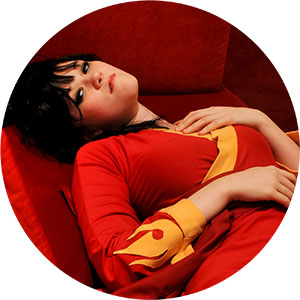 I probably still do, but early on, I definitely had a thing for making outfits that only showed up in one or two episodes of a show. I loved Avatar and pretty much all of the characters, but when Azula went crazy in the series finale, I knew that I had to do it.

The robe is a faux-wrap dress made from a rayon knit with a custom bamboo cotton bias tape. Flames and other details were added with Heat n Bond. The sash is made from a crepe satin.

I added extra wefts of hair into the wig so that I would be able to pull it into an updo more easily. I was glad that I did not need to make a neat ponytail for my first attempt at wig styling, but it was still a challenge to have it looking messy and crazy, but still good.

I did actually make the pants that she wears with this outfit, but I never ended up wearing them for pictures!