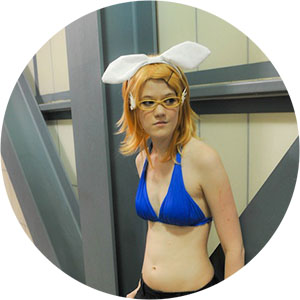 Variation: Stray Girl in Her Lenses

When I started this costume, I initially attempted to sew a bikini top from scratch and quickly discovered that regular sewing machines are not suited to sewing spandex like that. To save myself the frustration, I ended up buying a top instead.

For the glasses, I used an old pair of frames I had and removed the lenses since I would be wearing contacts with them. I then painted them gold and added the wings on the sides with craft foam.

Photos by Soulfire Photography, 2010. Also featuring Phorensic as a Bubblehead Nurse from Silent Hill 2, Senil'Ionia as a Needlewoman from Fatal Frame 3, and Danjitsu as Greed from Full Metal Alchemist: Brotherhood.