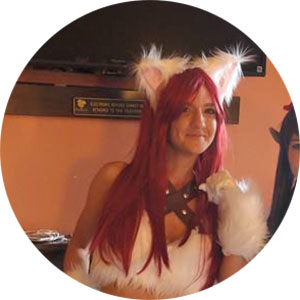 Working with fur is always a challenge, but it can look so nice!

I started with the top. I built a bra into it to give it the right shape and so Kelsey wouldn't have to worry about anything shifting around while she was wearing it. The fur is sewn to the bra in the front and has loops that the band can stretch through. The straps are attached to the bra in the front and the fur in the back. The studs on all of the straps and belts are actually large googly eyes that are spray painted silver.

I lined the skirt with a soft rayon fabric since the backing of the fur would be very itchy and uncomfortable. The skirt zips up on the side which was a challenge to install, but it surprisingly easy to zip up and down! I was worried that the fur would get caught in the zipper too much.

The gloves are a stretch knit with the fur cuffs attached. The knit goes all the way up to the top edge of the glove, again to prevent discomfort from the fur backing. The leg warmers have elastic at the top to help keep them in place below the knee.

The ears and tail are made with the same fur as everything else. I put wire in the bottom half of the tail so it could curl up at the end. The ears are lined with a light pink satin and attached to a clear headband to make them easy to wear.

All of the belts and straps are made from vinyl. The studs on all of the straps and belts are actually large googly eyes that are spray painted silver. They do make noise when they move around, but they are a great low-cost alternative to buying metal studs.

Made for Kelsey P.