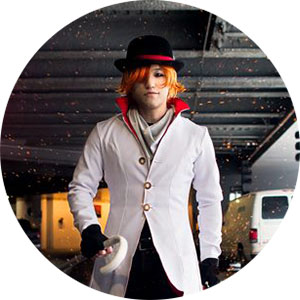 I made this jacket using the same fabrics and buttons as I did for Sonja's genderbend Torchwick so they would match--white gabardine for the outer shell and red satin for the lining. I also included the white topstitching since I loved the look of it from the other jacket. Daniel's original jacket was essentially a winter coat which he suffered through wearing in the summer, so we decided he needed a jacket that was not actively trying to kill him.

I matched up the seams to the original artwork and included real pockets that are large enough to fit a phone or a wallet.