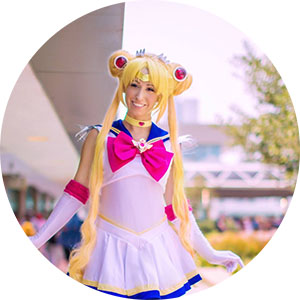 I made this Sailor Moon costume much differently than my own Sailor Neptune. I borrowed a few tips from Sparkle Pipsi's sailor fuku tutorial and used a few new ideas of my own as well.

The leotard is made from a thick white knit and snaps closed at the crotch. The chest armor is the same knit, but lined with white fleece to give it a bit of volume and definition. The gloves are made with the same knit.

The front bow and glove rolls are magenta satin that we matched to the color of her boots.

The skirt started out as a circle skirt. I added the blue and yellow stripes which were cut on the bias so that they would be able to stretch smoothly along the curve of the white part. I added horsehair braid to the bottom edge for extra volume and stability before pleating. The skirt is a separate piece from the leotard. The back bow is attached to the skirt.

I made the sleeve caps from clear vinyl and attached them to the shoulders of the leotard.

Made for Dejavudea. You can see it in action in her vlog from Otakon 2014 here. (Sailor Moon section starts around 5:58.)