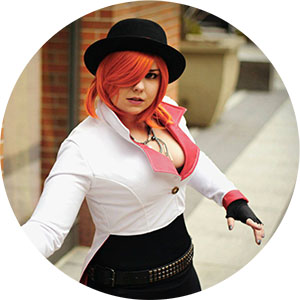 Torchwick is one of my favorite characters in RWBY so I was understandably excited when Sonja asked me to make her a female version of the sassiest villain. She sent me some ideas she had for the silhouette of the jacket and we combined those ideas with elements from Torchwick's original design. I think this is definitely one of my favorite things that I've made.

My favorite element of the jacket is the pleated tail section that allows bits of the red lining to peak out along the folds. I also topstitched all the seams with white thread to add a little extra visual detailing. The red cuffs were a bit of a happy accident. The measurements I was given for Sonja's arm length were much too long, which I could tell just by looking at the numbers, but I was not able to get a correct measurement before I needed to finish sewing the jacket, so I decided to make them as long as the measurement I had to create the cuff. I love the extra pop of color it adds.

I made the collar a bit shorter than I would normally so it could either be worn down or popped up.

Made for Soulfire Photography.