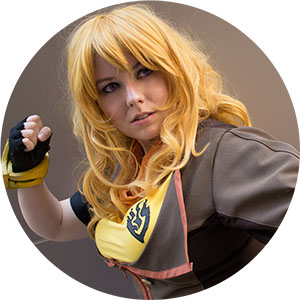 I got the amazing opportunity to make this costume before the character was ever introduced, so Sonja could wear it when the character trailer for Yang was revealed in July 2013. Though, not long after, I ended up remaking it for her since she had lost a lot of weight and it no longer fit!

The jacket is made from two different shades of brown with a rust-colored trim. In the second version of the jacket, I added extra buttons to the front, like in Yang's concept art.

The first version of the skirt/belt was made with individual strips, like a gladiator skirt, but was remade as a pleated piece once we saw how it moved when she was animated. The white piece is chiffon cut with a hot knife so it did not need to be hemmed, which would have added too much definition to the edge. We wanted to keep it as light and flowy as possible.

The shirt and scarf are both made with knit fabrics. The symbol is matte black vinyl, sewn to the shirt. The same material was used for the sleeve cuffs on the jacket.

Made for Soulfire Photography. Wig styled by Barracuda Cosplay.