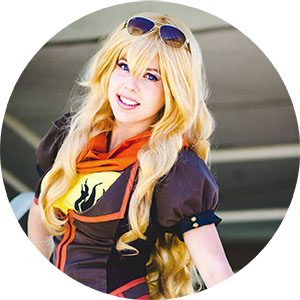 Courtney makes such an adorable Yang and I was super happy to be able to make this jacket for her. This was my second time making the jacket, so I already had the pattern mostly finalized. (I made this before making Sonja's second version.)

I have used the same fabrics on all of the Yang jackets I've made--I am very happy with the colors and contrast between the two browns. It zips up the front with a zipper that matches the bias tape trim. The puff sleeves have a matte black vinyl cuff with small gold buttons.

Jacket made for Courtoon. The rest of the costume was made by her.

Photos by York in a Box and FiveRings Photography, 2014.