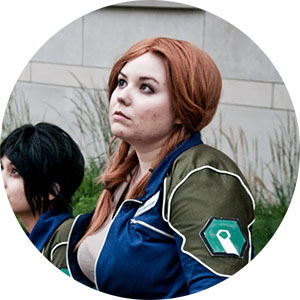 My first commission! Since it was my first time really sewing for anyone other than myself, I did run into some mishaps with the fitting, but it worked out ok in the end.

The jacket is made with navy blue and olive green twill with white piping. I ended up hand sewing the piping to the shape for the sleeve since I thought it would be a little easier than trying to deal with that shape on the sewing machine. The zipper pockets on the chest are decorative.

I also styled the wig. I parted the wig into two pigtails and twisted them into shape, and hair sprayed them.

Made for Soulfire Photography. She made the patches for the jacket out of craft foam.